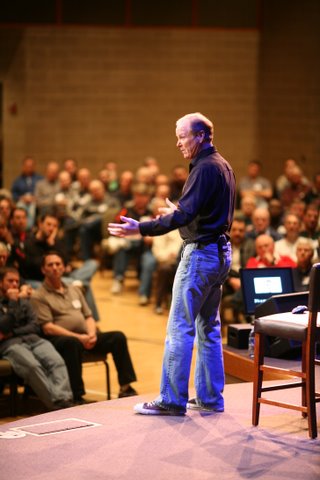 I’m passionate about communicating life-changing truth in the power of God’s Spirit. When I speak I have fun, and so does the audience.

Bill Perkins has conducted business and leadership seminars across the country for companies such as Alaska Airlines and McDonald’s. Bill has appeared on nationally broadcast radio and television shows, including “The O’Reilly Factor.” He addresses men’s groups around the world and has conducted chapels for major league baseball teams.

Bill served as a senior pastor for 24 years and is the founder and CEO of Million Mighty Men, White Horse Press and White Horse Ministries. He is a graduate of the University of Texas and Dallas Theological Seminary.

Bill has authored or collaborated on 22 books, including the best selling Six Battles Every Man Must Win and When Good Men Are Tempted. He also wrote 6 Rules Every Man Must Break, the Jesus experiment, and When Good Men Get Angry. Bill coauthored the business book Give ‘Em the Pickle!, and the Handbook to Leadership. He also published The Jesus Story, a blending of the four Gospels.

Bill and his wife, Cindy, live in Wilsonville, Oregon. They have three adult sons, four grandchildren and a golden-doodle.