At 1 AM Sunday morning, March 31st, I was relaxing in my bed reading when I heard what sounded like fireworks exploding outside. Curious, I looked out a second-story window that faced west toward a park and saw an orange glow and people with cell phones taking pictures. Thinking they were watching an out-of-season private firework display, I walked down the hall to a bedroom with a window that faced east. Upon pulling up the window shade I saw a wall of fire 50 yards behind our home reaching 100 feet into the night sky. About that time I heard  someone pounding on the front door and screaming, “Get out of your house! There’s a fire! Get out now!”

I told Cindy to put on her shoes because we had to immediately get out of the house. Of course, she hadn’t seen the fire or understood why someone had been poun 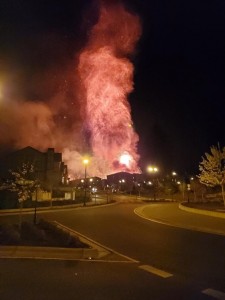 ding on the door. “There’s a massive fire behind our house,” I said. “The condos, the ones  under construction, they’re in flames and we need to get out.” She put on a robe and I put on her coat–I didn’t want to look  for mine and hers was hanging over a chair in front of me. I had my right knee replaced 20 days before and yet in that moment, fueled by adrenaline, I didn’t lose a step. Once outside we saw a scene of panicked home-owners sprinting away from the fire. I realized I had left my cell phone in the house and wanted to retrieve it. The moment I took a step toward my home, a neighbor yelled, “Bill do not go back inside. You may not come out. Don’t be crazy.” As I looked up at the billowing fire I figured the risk wasn’t worth the reward and so I crossed the street to the park and watched something unlike I had ever seen. The fire investigator told me the next day that throughout his career he had only seen two other fires that matched this one in intensity and size.

While I watched the fire, Cindy continued to run away from the inferno, afraid debris from the updraft would fall on her. In spite of the danger the flames possessed a terrifying beauty–like a hundred firework displays ignited at once. Glowing and burning objects floated into the sky–one woman said she saw a car windshield flying overhead. Explosions, one after another, reverberated through the warzone that ten minutes earlier had been a quiet neighborhood. I was told the explosions were car tires and windshields exploding. Cars parked in the street erupted into flames.

The first fire truck arrived shortly after we got to safety. The remaining trucks, from four surrounding cities, took another 20 minutes. It was later reported that seven of the fire trucks suffered paint damage due to the heat. Once the four story, fully framed building collapsed, the fire lost half it’s height and I walked to our driveway past the sirens, flashing emergency lights, rows of fire hoses, fire trucks and focused fire-fighters. Parked beside our driveway was a firetruck with a 150 foot hydraulic aerial ladder with a platform and hose. Once extended the hose under the ladder shot a torrent of water down onto the houses adjacent to ours to extinguish those already on fire and protect those that weren’t.

Even at that late hour a huge crowd of onlookers gathered to watch the spectacle.

By four AM the fire had yielded to the water and all that remained was a pile of charred boards and beams and puffs of steam and smoke. We went to bed thankful nobody was injured and our home and one of our cars only sustained minor damage. At 8 AM, when I next looked from the window, a single firetruck remained dousing hot spots. Throughout the day a parade of curious onlookers jammed the streets and sidewalks hoping to see  the remains of the inferno. On Monday morning a chain-link fence enclosed the debris and yellow police tape forbade anyone from crossing into the potential crime 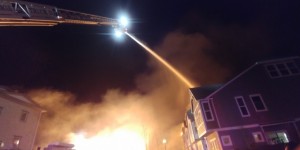 scene. Today, Wednesday, FBI and ATF teams sorted through the rubble looking for clues to the fire’s origin.

Meanwhile, traumatized neighbors and friends try to figure how to get their life together. The night of the fire a couple, who were not allowed back in their home, stayed with us. A neighbor whose home was destroyed told me her brother hung himself Tuesday night. He called her, the only person he felt safe with, and she couldn’t talk because her insurance adjuster was there. She promised to call right back. He didn’t answer. Tragedy on tragedy.  Tears over tears.

At times like this I think of Paul’s words to the Corinthians: “Praise be to the God and Father of our Lord Jesus Christ, the Father of compassion and the God of all comfort, who comforts us in all our troubles, so that we can comfort those in any trouble with the comfort we ourselves receive from God” (2 Corinthians 1:3-4). And his words in Romans 8:28 where he says,  ” . . . in all things God works for the good of those who love him.” Somewhere under the rubble is the goodness of God, searching to bring comfort and hope.