Home Uncategorized A Thought: On My Fiftieth Wedding Anniversary 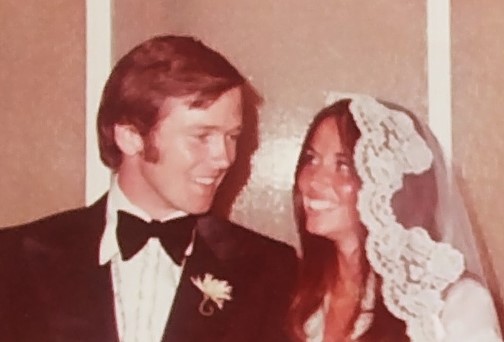 Saturday, my wife Cindy and I will celebrate 50 years of marriage. Prior to our wedding we dated a year-and-a-half. On our second date, a day after our first date, a day after we first met–although she says we met a year earlier at Arrowhead Springs in California–I told her I thought she was the girl God wanted me to marry. She agreed. We’ve been together since we first met. Or, since our second meeting, according to Cindy.

I’m suspect you wonder why I made such a hasty declaration. I can think of two reasons. First, Cindy was, and remains, the most beautiful, cheerful and faith-filled girl I had ever met. Still is.

Second, she had no idea how high I was reaching or how low she was stooping. A seminary professor once asked me, “How did you end up with Cindy?” “The grace of God,” I answered. “For you, but what about for her?,” he asked with a smile.

For my part, the moment we met I knew she was beyond my reach. Something she didn’t realize and doesn’t yet realize. For over fifty years I have never forgotten those two truths. I determined, by the grace of God, to never say or do anything to wound her (yes, we’ve had arguments but I’ve never wounded her). I also determined, by the grace of God, to tell her daily, or more often, how much I cherish her beauty, her kindness, her smile, her eyes, her form, her faith and more. I once asked her, “Do I tell you too often how beautiful you are? Do you get bored hearing it so many times?” She insisted she never tires of hearing those words.

As I write this blog I’m reminded of the book, The Man Who Mistook His Wife for a Hat, by Dr. Oliver Sacks, a neurologist, who tells the story of a man, Dr. P., who suffered from a disorder called visual agnosia.  Dr. P., a well-known musician and teacher, possessed excellent musical and reasoning skills.  But because he had visual agnosia he mistook one object, or body part, for something or someone else.

Dr. Stone recounted the first time the two met at his clinic. During the examination Dr. Stone had his patient remove a shoe so he could perform a reflex test on the sole of his foot. Once the test was completed, Dr. P. could not put his shoe back on because he thought his shoe was his foot and his foot his shoe.

A more surprising mistake occurred later when Dr. P. thought the examination was over and he started looked around for his hat. He “reached out his hand and took hold of his wife’s head, tried to lift it off, to put in on. He had mistaken his wife for a hat!” And how did his wife respond? Oliver Sacks said, “His wife looked as if she was used to such things.”

A Masterpiece of God’s Creation

I’m not sure which is sadder—a man who mistakes his wife for a hat or a wife accustomed to such treatment. Sometimes men fail to see their wives as a masterpiece of God’s creation. While they may not treat them like a hat—they don’t treat them like fellow-heirs of the gracious gift of life (1 Peter 3:7). And tragically, women sometimes accept such treatment.

Sadly, Dr. Sacks found no cure for Dr. P.’s malady. Thankfully, I’ve never suffered from visual agnosia. And my wife’s never had to adapt to me treating her like a hat. Or worse. After fifty years with Cindy, I agree with Solomon who said, “He who finds a wife finds what is good and receives favor from the LORD” (Proverbs 18:22). It was Solomon who wrote words that have become my refrain. When he looked at his bride he said, “How beautiful you are, my darling!  How beautiful! (Song of Songs 1:15).  If you want a happy wife, and a happy marriage, tell her daily you love her and never stop praising her beauty.