Home Sin An Alien Egg Under a Tumbleweed 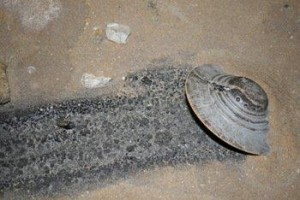 On July 8, 1947, an alien spacecraft crashed outside of Roswell, New Mexico. While the crash of the UFO is common knowledge, few know that before dying the lone surviving alien managed to safely store a large egg in a rift near the crash site.

For years everyone always told me, “You’re strange.” Or, “You’re really different.” Or, “You’re from another planet.” They would even joke about the fact that I grew up in Roswell.

Of course I always took such comments as friendly banter until the day I flew to Roswell, rented a car and drove to the crash site. Once there I realized it was an excellent place for an alien craft to crash—in the middle of nowhere. Except for the sighting by a rancher nobody would have known.

Anyway, as I stood in the middle of a barren field surrounded by rocks and tumbleweeds a beam of light enveloped me. Before I could identify the source of the beam I passed out.

When I woke up under a Mini Cooper sized tumbleweed, I held a book in my hands. It couldn’t have been more than two hundred pages long and weighed less than a pound. It carried the title: Understanding Your Alien Identity. I thought the book looked irrelevant since I was born and raised in New Mexico and could prove my US citizenship. And then I remembered my wife saying, “I think that UFO must have deposited an egg that hatched two years later. That would explain your . . . umm . . . existence.”

Curious I opened the book and thumbed through its pages. If I was truly of alien origin I would have hoped for a revelation about my identity that would take me to a place like Superman’s Fortress of Solitude that’s 130 miles due south of the geographic north pole. That’s a cool place with huge crystals and where Superman’s father, Jor-El, appeared to him in the form of a hologram.

All I had was a book that, fortunately for me, was written in English and not some alien script. Anyway, I’ve spent years studying the book in order to understand my unique alien powers so I could utilize them for the benefit of truth, justice, and the American Way.

While that story is fictional, it’s not fictional that I’m an alien. But my alien identity wasn’t derived from an extraterrestrial being that left an egg on a hillside in New Mexico. It was derived from God when he gave me his Spirit and made me a new creation in Christ (2 Cor. 5:17). Peter told his readers that they were “aliens and strangers” (1 Peter 2:11) and that they have an “inheritance” that is kept for them in heaven (1 Pet. 1:4). Paul told the Philippians, “. . . our citizenship is in heaven” (Phil. 3:20).

It’s a spiritual reality that if you know Christ, you’re an alien who is visiting this world. You’re a stranger here. You’re truly a new man, a good man, in Christ. And the key to moral and sexual purity is found in your new identity. Ultimately, when any of us fall into sexual sins it’s because we’ve allowed our flesh to steal our identity so that we think and act consistently with its sinful passions. We must recognize when this happens and choose to act in a manner that reflects our new life in Christ

If the truth of this blog sinks into your mind, it has the power to radically change you for the better. You see, an encounter with Jesus Christ transforms the genetic stuff of your spirit. If you’ll invest some time and study the book that explains your new identity, inheritance, and new power over your flesh, you’ll see yourself from God’s perspective. When that happens, you’ll live like the new man, the good man, you are in Christ.

The opening story was lifted from my book, When Good Men are Tempted.