Home Faith I Had a Powerful Spiritual Experience 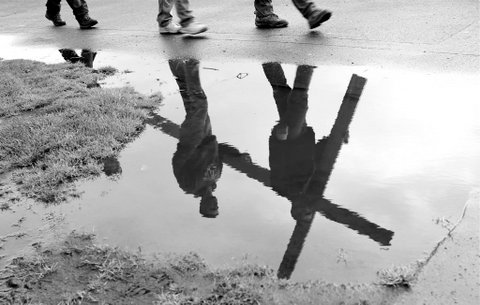 Seldom had I hoped more for sunny weather. If not sunny, at least dry. The idea of 69 people carrying life-size crosses from the east side of the Willamette River in Portland, Oregon, across the Steel  Bridge and then south for 1.5 miles before returning to the starting place, excited me. The idea of doing so in 50 degree weather in pouring rain had less appeal.

April 19, the day of the Cross Walk, started out good enough–a dim sun shining through opaque clouds. But the forecast called for an intense but brief storm to hit the city between noon and 4 pm–the exact time of the Cross Walk. Actually, the forecast proved wrong. The rain started at 11:30 in the morning.

We had been planning the event for two years. At the convention center parking lot the crosses were made, the three member teams listened to praise music drank hot coffee and snacked on brownies. A photographer from the Oregonian snapped images, as did an AP reporter, a European reporter and a local photographer whose images were viewed around the world.

I stood on the edge of a small stage under a canopy and gazed at the black western sky. My prayers for a lull in the storm seemed as effective as a feather halting a train. Rain drops pelted the canopy and streaked the air.

And then at 11:55 God turned off the spigot and the rain stopped. The sun pushed back the storm clouds and smiled softly on the city of Portland.

Teams of three picked up their crosses and began the silent walk with Jesus. Cindy and I joined three friends and took turns carrying the bottom of the upright beam. We carried the cross on a switch-back ramp that led to the Steel Bridge and then we crossed it. Once on the other side, with the sun warming  the air, I looked toward the East and saw four crosses on the bridge and four more on the ramp. Tears filled my eyes and ran down my cheeks.

When the last team entered the parking lot the clouds, like a closing curtain after a play, hid the sun. A light mist floated through the air. Several pastors spoke briefly about the final words of Jesus on the Cross.

It was one of the most moving spiritual experiences of my life.

I remembered the words of Jesus when he said, “If I be lifted up I will draw all men to myself.”