Early in our marriage Cindy and I identified the “I don’t want to feeling.”  It’s what we felt when the selfishness monster pleaded with us to disregard the other person.  Of course, recognizing the presence of the creature doesn’t mean he’ll graciously leave, especially in areas where he’s established control.  But he can be bridled, led to a cage, and deprived of the freedom to roam around our hearts destroying our marriage.  Here’s how.

Step One: Seriously admit the depth of the problem.

This likely won’t happen until after you ask God to show you the evil of your self- centeredness.  It’s easy to tip our hat to problems as though such recognition will wave them away. 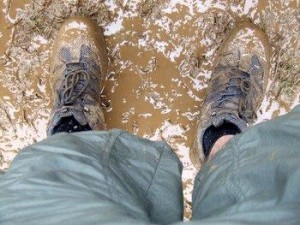 Several years ago I noticed an elevated walkway that led from one of our decks to the yard had shifted slightly.  A friend mentioned that one of the pilings on which a support beam rested could be sinking.  He suggested I check it out.

I agreed something seemed amiss, but it didn’t appear worthy of a closer look.  After all, trees shrouded the walkway and getting to the source of the problem would be a hassle.  Fortunately, a week later, I climbed under the walkway and found raw sewage dumping into our yard.  Moles had dug holes under the pilings causing them to sink and break the sewage drain that ran directly beneath the pilings.

Until I saw the seriousness of the problem, I wasn’t willing to fix it.  But I guarantee you, once I saw the flow of things, I wasted no time in repairing it.

Selfishness is like that.  You may see a few misplaced boards in your marriage.  Perhaps a support piling is sinking.  Not a problem, you think.  Until you realize selfishness is a broken sewage pipe dumping waste all over your marriage, you’ll make little effort to deal with it.

Ask God to show you the seriousness of the problem.  Pray he’ll show you how much of what you do is driven by a desire to be served.  Ask him to let you see how frequently your anger is triggered by selfish desires that are denied.  As you do this, you’ll be ready to take the next step.  We’ll look at it next week.