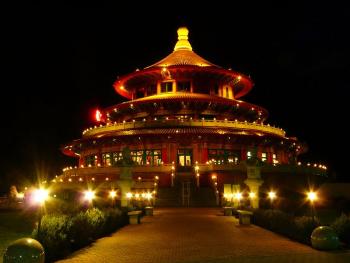 How does God deal with us when we choose to live as though he doesn’t exist? It might surprise you to discover that God simply turns us over to our evil appetites (Romans 1:24-32). Maybe that doesn’t sound so bad. But it is. An episode of The Twilight Zone shows just how harmful it can be.

The story centers around a self-serving restaurant critic who dies without realizing it. After entering a smoke-filled restaurant, he orders his favorite meal. A moment later the waiter places several plates of food on the table. The critic devours the food and begs for more. Never has he tasted such delicious food! He consumes plateful after plateful until the table is stacked high with empty plates.As the show closes, the camera backs away from the table and shows a room filled to the ceiling with stacks of plates. Even though he had eaten enough food to feed an army, his hunger wasn’t satisfied. It suddenly dawned on him that, no matter how much he ate, his craving for food would never be satisfied. In despair, he cries out. But it’s too late.While that story doesn’t describe hell, it does describe how God judges us when we turn our back on him. Paul makes it clear that God has revealed himself to all men through creation. While there isn’t enough information about God in creation for a person to believe in Christ, there is enough to convince him God exists. If men respond to that revelation by turning away from God–then God will judge them. But his judgment won’t come in the way expected. God seldom strikes people with a bolt of lightning. Or, has the earth swallow us. His wrath, or judgment, normally comes in three ways.

First, he will hand us over to our base desires (vv. 24-25). Without God’s Spirit and Law to restrain us, we’ll be swept away by our impure appetites into a lifestyle of immorality. In order to justify our behavior, we’ll have to find a religious system that permits immorality. If we can’t find one, we’ll create it.

Second, God will give us over to “shameful lusts.” We’ll do those things we once considered abnormal and degrading. We’ll indulge in activities, which in the past, we would have hidden from others. Rather than choosing healthy sexual relationships, men and women alike will indulge themselves in “indecent acts” with one another. Ultimately, our own unbridled passions will destroy us.

Finally, God will hand us over to a “depraved mind.” Once that happens, we won’t be able to tell right from wrong! Paul lists twenty-one examples of such thinking. He climaxes his discussion with a shocking statement. Those with a depraved mind, know their behavior displeases God. They know God’s judgment will fall upon them. Yet, not only do they continue in their lifestyle, they applaud others who live the same way.

Paul’s words are sobering. If we choose to turn our back on God, he won’t stand in the way. Instead, he’ll hand us over to our base appetites. Like the man who found himself in the twilight zone, we’ll discover appetites which can’t be satisfied, no matter how much we feed them.

In the context of Paul’s letter to the Romans, the apostle wants us to know that sin is serious. It’s progressive. It’s deadly. But as the rest of the letter points out, there is forgiveness and freedom in Christ. Thank God!